ENGIE has asked about 40 startups and innovative companies to showcase their work during ENGIE Innovation Week at our Energy Lab at Vivatech. But Prodeval is not exactly a startup, since it has been around for 25 years. Yann Pierre, its Chief Operating Officer, shared some information about his company with us. 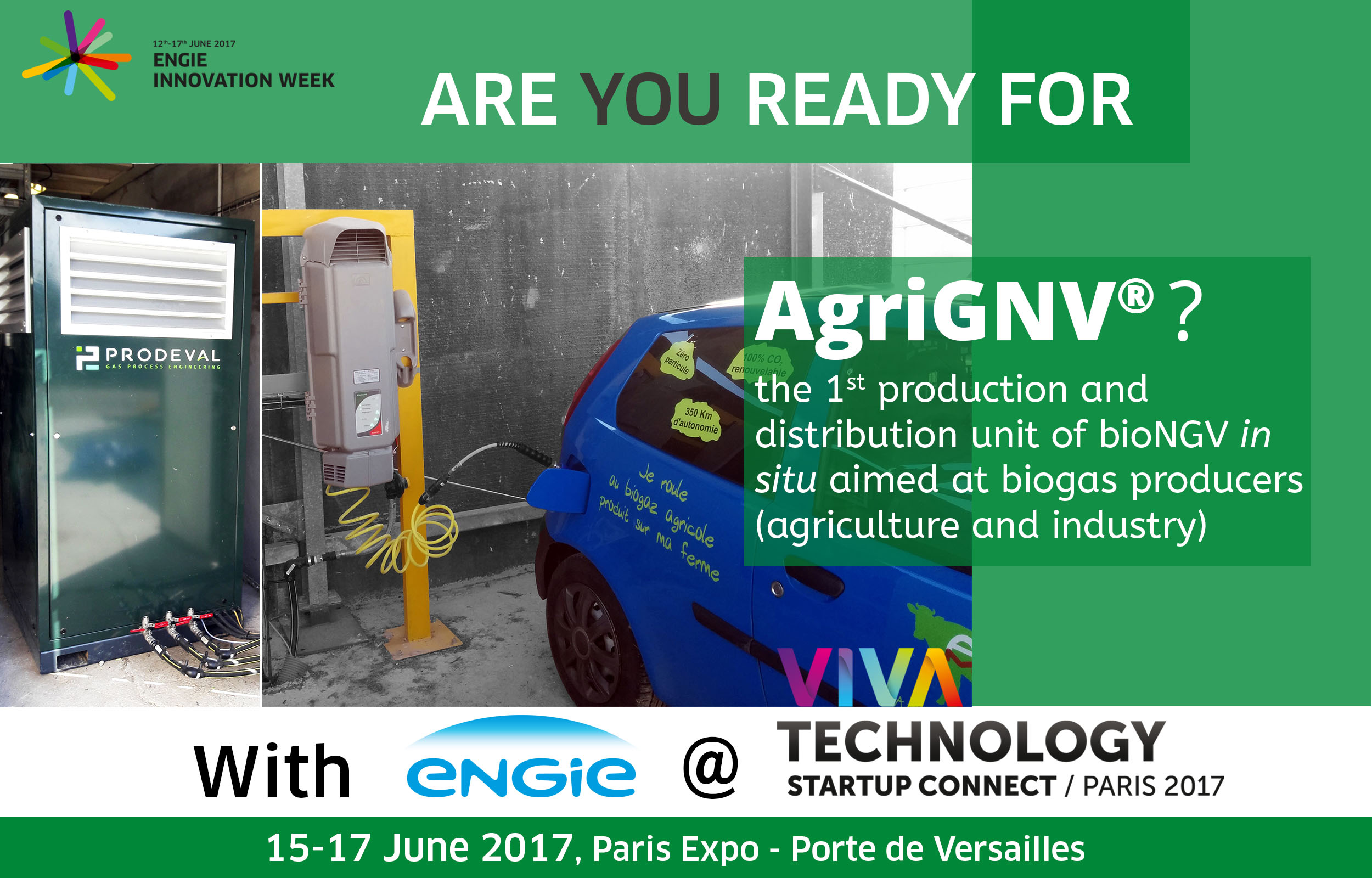 Hello Yann, can you give us a short introduction to your company?


Prodeval is a growing French SME (40 people, €8 million in sales) that has been specialized since 1990 in innovation and engineering for processing and creating value from biogas (biomethane, bioGNV, etc.) We work with the agricultural, industrial and water treatment and waste recovery sectors. Prodeval works closely with its customers to meet the high standards of the energy transition. We are densely enmeshed in a network of local, specialized partners, and we design and manufacture our technologies in the Drôme while making sure we participate in the local economic fabric.


How is your project innovative?

We innovate in several areas:

Although the market for NGV and bioGNV is booming in Europe, it is still relatively marginal in France, where fewer than 15,000 vehicles are in circulation, mainly buses, heavy trucks and utility vehicles. However, according to the Factor 4 scenario, the share of natural gas-powered vehicles is expected to increase to 42% by 2050.

In this context, developing in the bioGNV sector will require not only vehicles and a distribution network, but also tools for producing bioGNV from biogas.

AgriGNV® allows our customers to recover and use surplus biogas. It can be installed quickly and easily. As such it could be a critical link in the biogas system in France (where there are 400 methanizers) as well as in Italy, where Prodeval also works. AgriGNV® could also become an important tool for improving the image of the bioGNV sector. Several projects are currently under consideration that could help shape legislation in the sector’s favor, particularly regarding the sale of bioGNV.

- Comfort and ease of use:

The unit is compact and operates in an ON/OFF mode. The solution’s scalability makes it possible to adapt fuel production based on actual needs, and therefore to increase production with the vehicle fleet. Filling the vehicle can initially be carried out slowly and then sped up as the number of vehicles increases (by storing bioGNV, for example).

Burning fossil fuels generates fine particulate matter that, in the long term, can cause cardiovascular disease, asthma or respiratory development problems in children. The World Health Organization (WHO) estimates that the number of premature deaths due to urban air pollution in the world was 1.3 million in 2010. With these major public health concerns in mind, vehicles that run on CNG and bioGNV have an indisputable advantage: they emit little nitrogen oxide, little carbon monoxide, and no black fumes – unlike diesel and gasoline. Integrating NGV and bioGNV into the transport energy mix is a quick solution for reducing particulate pollution in the city and for transporting goods.

In terms of greenhouse gas (GHG) emissions, bioGNV is the best-in-class fuel, and it performs better in terms of emissions reductions than electricity or biofuels. (Source: ATEE Club Biogaz). AgriGNV® allows you to replace fossil energy with bioGNV produced from locally-recovered waste.

For this model of a circular green economy to be economically viable, the investment and operations costs for bioGNV production need to be low. AgriGNV® costs around €80,000; Including odorisation, the distribution and filling station of bioGNV. PRODEVAL is working to reduce the cost of the solution.


- The benefits of this solution include:


What are you going to show at Vivatech?

Videos about AgriGNV®, the first in situ bioGNV production and distribution unit for the agricultural and industrial sector! We will present AgriGNV®‘s technical features and innovative aspects, narrated in part by Philippe Collin - the first farmer to use AgriGNV®.

What do you expect to get from participating in Vivatech with ENGIE?

We hope to share our green mobility solution to a wider audience than usual (typically those we meet at specialized trade shows, etc.) and also to meet ENGIE partners to see how we can work together.