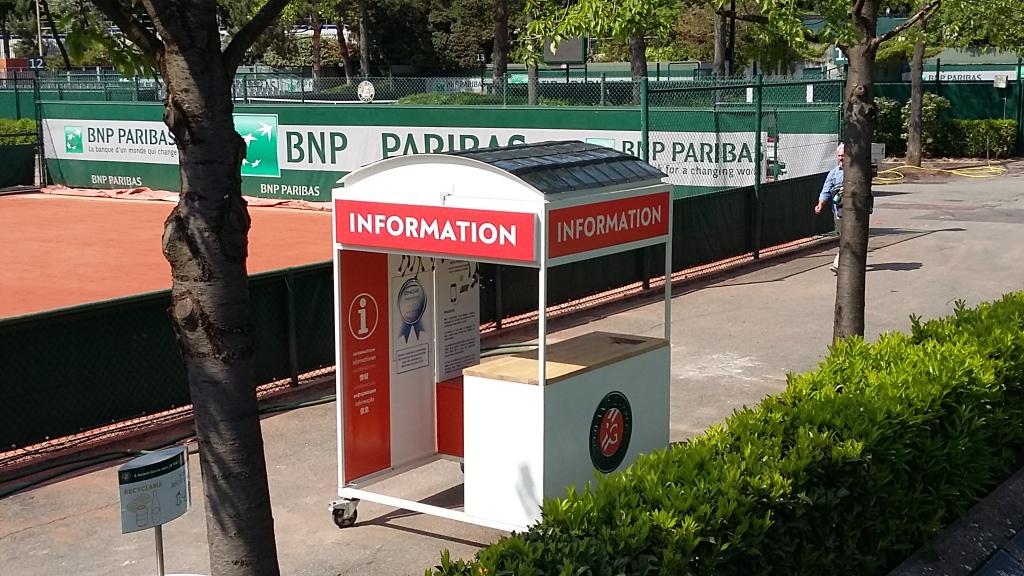 €256 million of turnover in 2017, 80% of which is for export, and 1850 employees... For once, the winner of a call for projects launched by ENGIE isn’t a startup!The call for projects asked for mobile phone charging solutions for the spectators at Rolland Garros; Armor’s proposal was the selection committee’s favorite. Mobile, solar and shared, the solution that will be installed at the new court 18 from May 21st to June 10th meets ENGIE’s goals of offering green energy to as many people as possible.François Barreau (a marketing manager and business developer at Armor) talked to us about the company and about what drove the flagship of the Nantes industrial landscape to respond to ENGIE's call for projects.

Armor is a French industrial SME with international influence, founded in 1922 and based in Nantes. From the beginning Armor has been in the ink business: formulating it, adjusting its coating properties and transforming it for use in printing. The first applications were developed just after the war, when Armor became a reference supplier for typewriters: ink ribbon, carbon paper ...

In the 1980s, Armor acquired thermal transfer technology that had been created in Japan to print thousands of Kanji characters. We thought the technology could be used to enrich our office product line. The technology actually ended up being used for faxes, but the trigger for developing it further was the massive influx of barcodes that were created to automate inventory management. The most suitable technology for printing barcodes on objects was heat transfer. Industry began to widely use a technology that we thought was only going to be used in office automation, turning it into a major technology.

Other applications for this technology have since emerged such as printing train or plane tickets. Armor has widened the field of potential uses by inventing an ink that allows users to print directly on flexible bags (for example the expiry dates on plastic salad bags), which facilitated the widespread development of flexible packaging across the world. Armor has gradually moved from being a European-level company to a global one, and is now established on every continent.

In 2007, Mr. de Boisredon wanted to use Armor's industrial expertise to provide tangible, innovative solutions for energy transition issues. Organic photovoltaics – an area that has much in common with heat transfer technology - had emerged as a promising technology that could successfully migrate from the laboratory to industrial production.

At the end of 2016 we produced the first organic photovoltaic films at an industrial scale. We also developed other things like current collectors and consumables for 3D printing. In short, Armor is a company driven by innovation that constantly demonstrates its ability to transform while putting its know-how to use for sustainable development.

Can you tell us more about your photovoltaic film?

What were the stakes for Armor in responding to this call for projects?

I could summarize by saying that, beyond the service rendered to visitors, it helped make the work done up until that point by our development teams more real and confirmed the values ​​we believe in. Armor's vision has a lot in common with that of ENGIE, particularly when it comes to sustainable development, innovation, and decentralized energy in particular.

Our ASCA photovoltaic film can be applied to any kind of surface and its qualities of lightness and flexibility mean it can be used in many ways, for example to supply a building or object it has been applied to. For this call for projects we submitted a charging station that reflected our understanding of the future of energy: decentralized, autonomous, shared and green. Being able to provide spectators at Roland-Garros with batteries that have been recharged using solar energy and pooling this energy was a first vision of the ways ASCA film could be used: allowing everyone to draw some of their energy from the sun.

Another reason we applied has to do with our African adventure, where we have been experimenting for two years in areas that are unsupplied with electricity with solutions that allow villagers to recharge their phones without having to travel tens of kilometers. There were parallels with the situation at Roland Garros: energy that is mobile and brings itself to users, not the other way around.

So we created a compact mobile cart that could move throughout an area that lets people visually understand the renewable aspect of where the energy comes from. Without knowing it, our response was similar to that of the FFT which also uses trolleys for its information stations. To facilitate the flow of people and goods in the new area and for safety reasons, the FFT wanted to limit the number of trolleys on site at one time and it became clear that we had to adapt our solution to fit the FFT trolley while adding green energy.