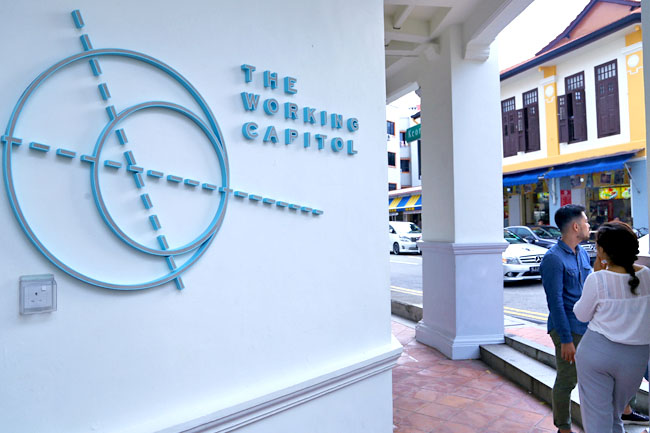 ​ENGIE Asia Pacific: innovation is up and running!

Hello Charline. Given that events were being held every day during ENGIE Innovation Week, you were able to cover a range of strategic topics for ENGIE. What were the most important events in your opinion?


I would first like to say that this is the first time that Innovation Week has taken place at such a scale at ENGIE Asia Pacific. The teams’ great enthusiasm meant that we were able to organize an event every single day!

The hydrogen roundtable in Singapore, a site visit in Rayong (Thailand), conferences and training sessions for pitching “city of tomorrow” projects in Bangkok, a creativity and networking workshop on green solutions... All brought employees, partners, institutions and universities together to think about the future they’re building with ENGIE.

The hydrogen roundtable was held in Singapore on Monday, June 6th in an emblematic location for innovation in Singapore: The Working Capitol, a co-working space focused on creativity and technology.

We were fortunate to have a number of outstanding speakers for the panel: Csaba Szabo of the Stanford Research Institute agreed to lead a discussion between Quentin Vaquette, an ENGIE intrapreneur who is developing the "Hydrogen solutions for remote areas" project; Teddy Püttgen of the Nanyang Technological University of Singapore (NTU); and Hélène Pierre from ENGIE Labs CRIGEN.

Why choose hydrogen as the topic of this roundtable?

For several reasons! First of all, we wanted to present Quentin Vaquette’s Hydrogen project and see how it fits with other hydrogen initiatives such as the REIDS project.

Secondly, now is the right time to restart the debate about hydrogen as a storage solution for green energy. Its properties have long been known, but until recently it cost too much compared to battery storage. But now, we believe that this reliable, competitive and 100% renewable energy solution will allow us to make the most of solar energy day and night.

Hydrogen is becoming an important part of ENGIE’s development strategy in the Asia Pacific region, and the conference also meant to draw the Singaporean authorities’ attention to this solution’s potential as part of the energy transition.

Are you satisfied with how the roundtable went?

We were able to bring together about forty people – stakeholders, representatives from several universities, ministries, organizations, and startups – and we're really excited about some of the very positive feedback.
The audience was largely receptive and actively participated, and the Singaporean press will talk about the event.

We managed to attract interest from the EDB (Economic Development Board of Singapore) and we started discussions about hydrogen projects to be launched here. So we’re very satisfied!

What other event this week made a big impression on you?

We hosted a conference in Bangkok on "the city 3.0" and a workshop called "Pitching Learning Sessions" for our employees.
Csaba Szabo was also there for the workshop, which involved training sessions in small groups. In the space of an hour and half, participants were able to set their ideas out and prepare their presentations on "what City 3.0 innovation would you like to see in the near future in Bangkok?” before pitching them to the other groups.
Participants didn’t have to address energy alone - many went beyond their specializations and suggested solutions for domestic robotics, waste management and mobility.

People were really pleased with the experience and seemed interested in doing it again!

Would you say that Singapore really is the “land of innovation”?

Absolutely! Singapore and wider Asia Pacific region are full of innovations, including really promising startups in the greentech sector and organizations dealing with energy. It’s an ideal place to set up a dialogue with many partners.