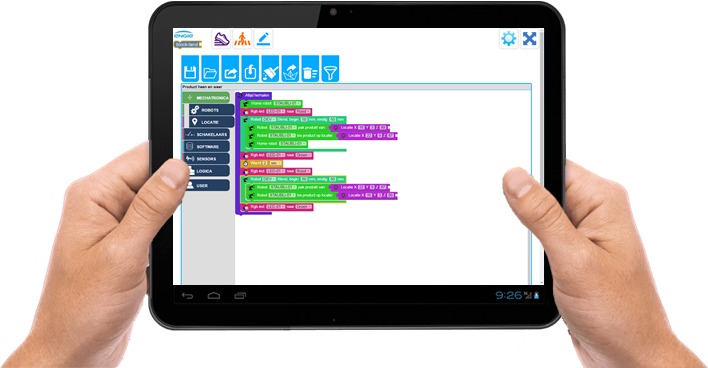 A smart, flexible software system for industrial robots and equipment: not only does it allow users to configure their robotic resources but it also enables flexible linking of sensors, other robots or controllers (e.g. PLC or PC) and over-arching control systems such as SCADA, MES or ERP. To keep the software as accessible as possible, it uses a graphical programming language originally developed for children, instead of the traditional, less accessible automation languages.

A user-friendly, smart and flexible software system that significantly simplifies the (re-)configuration process of industrial robots and equipment. As a result, the production process can now be configured rather than programmed, making the task of configuration set-up and modification much more comprehensible, intuitive and easy to realize. "A child is now able to do in five minutes what an expert would have taken days". An in-house software development, that uses graphical programming languages originally developed for children to facilitate the configuration of robots, flexible linking of sensors, controllers (PLC or PC,..) and overlying control systems such as SCADA, MES or ERP.

Other trophies of the same theme