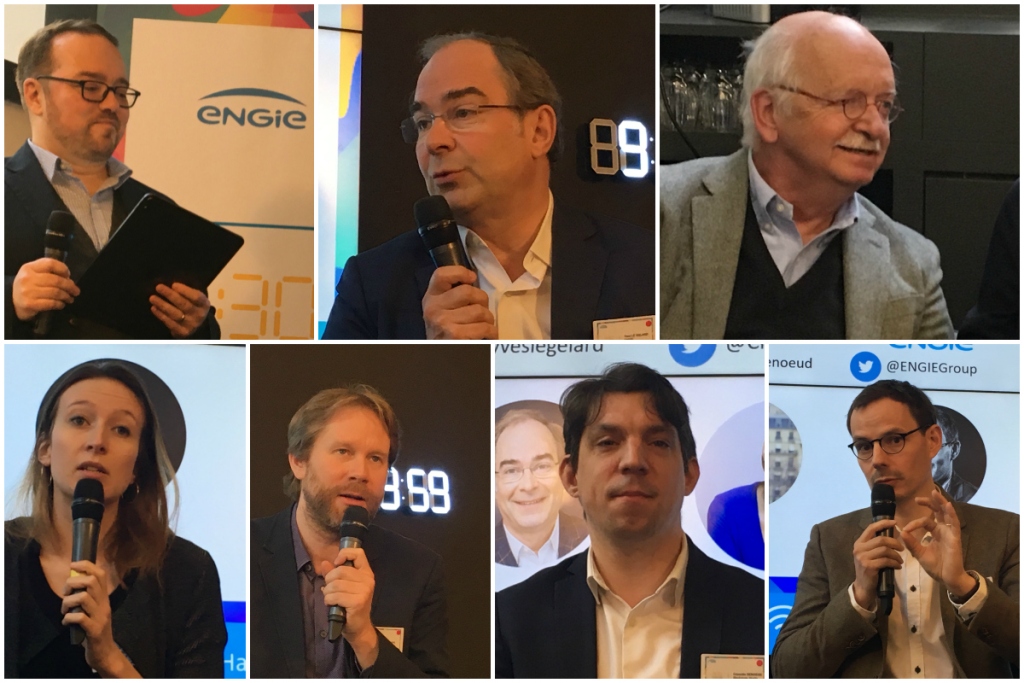 Blockchain: what’s it about? This very trendy topic attracted more than 150 people for the 3rd edition of Les Matinales at 8:30, ENGIE’s digital wakeup on March 26.Alongside Yves Le Gélard, COO and DSI of ENGIE Digital, Claire Balva, CEO of Blockchain Partner, Corentin Denoeud of Blockchain Studio, Eric Larcheveque of Ledger and Thierry Mathieu, co-founder of the project TEO - The Energy Origin, we will try to dig deeper in a debate led by Cédric Ingrand, and concluded with its usual panache by Erik Orsenna.

What is the blockchain? An attempt at a definition

For many, the blockchain is still a mysterious subject. We are told that in the coming years it will revolutionize every field of work, making many disappear. But for the time being it is still difficult to grasp how it works. People compare it to a register or a shared network. It is open to everyone, and every modification is approved and timestamped in a permanent and searchable way.

Lastly, according to Corentin Denoeud of Blockchain Studio, the blockchain allows people with insufficient trust in each other to communicate without going through a trusted third party.

Right from the start, the blockchain raises questions and makes people talk!

Pocket history of the blockchain

Many people still confuse bitcoin and blockchain. That’s normal, because they were created together. Actually, before 2013, 2014, Bitcoin was the only real blockchain. Since then, many other blockchains have been created, one of the most famous being Ethereum. There are hundreds of others – maybe thousands – since many blockchains are private. For the record, let's mention SUNGIE, a cryptocurrency created by ENGIE for solar energy.

Yves le Gélard: For many, the blockchain is the daughter of the cloud. While the cloud has made system architecture evolve considerably over the last ten years, the cloud also involves putting one’s full trust in the service provider, and all the ensuing debates that generates. The blockchain allows you to add an element of trust and access to a new generation of architecture.

Cédric Ingrand: We knew that in cloud and peer-to-peer systems, suddenly data could circulate from one user to another on the internet without a central server. The blockchain is the next step where nothing else depends on a central server.

What is the blockchain for?

It was precisely on the subject of the uses of the blockchain for companies, particularly in the energy sector, that Corentin Denoeud of Blockchain Studio, Eric Larcheveque of Ledger and Thierry Mathieu of TEO helped us to see things more clearly.

The principle of a blockchain is to create trust between stakeholders. There are currently two major use cases: traceability/ certification and the transfer of values. With regards to energy, these two uses are linked.

The energy sector will soon be decentralized, and as part of that there will be direct transactions between producers and consumers. The blockchain is a promising way for these transactions to be made with confidence. Another use involved being able to certify energy as having renewable (or local) origins when sold to a community, a local area or an industry. Paper certificates are not enough anymore. Being able to certify the origin of energy is becoming indispensable, and more and more customers are asking for it.

TEO is a project that was initiated by ENGIE employees through the incubation process. Started two years ago and now based in Station F, the startup has developed a solution based on the blockchain to guarantee and trace the origin of energy – especially renewable energy. TEO uses the technology developed by Ledger to create physical boxes that are installed on meters and which retrieve information about production and consumption while autonomously signing the transaction by interacting with the blockchain. Once the information about production and consumption have been accurately mapped, micro-payments can be made between consumer and producer and managed completely automatically.

Claire Balva: The blockchain makes it possible to certify documents instantly and very inexpensively, making it a sort of "decentralized notary". This kind of certification will be used in more and more areas: to manage the traceability of physical and digital objects, food traceability, traceability of energy consumption, etc.

The blockchain is an internet of value. It allows you to send digital assets (thus, values) whether they cryptocurrencies, votes, or certificates without a third party to serve as an intermediary (whether a bank, notary or other). Other use cases outside the energy sector are beginning to emerge. AXA has launched Fizzy, insurance for air travel that activates fully automatically when your flight is delayed.

The constraints of a totally decentralized world

The new decentralized world of the blockchain also has its constraints: when things are totally decentralized, no central intermediary can give you back your password, for example. This is only one of the examples of a very different user experience than we are used to. If we want to get closer to the user experience that we know today, we have to move away from total decentralization and reapply a layer of concentration. The issue is where to place the cursor.

Corentin Denoeud reminded us that we are currently in a position with the blockchain that is equivalent to where we were with the web in the 1990s. The blockchain equivalent for the web would be the TCP-IP. Most web users hardly know this protocol, although they use it every day. What’s missing from the blockchain are the layers that make using it "transparent". The blockchain will only really develop when users no longer realize they are using it, which is the case with TCP-IP today. "There are 1500 blockchain protocols in the world. They change all the time, and this unstable situation is going to last a few more years. This makes it complicated for companies that would like to use the blockchain to get started."

The Rockside product developed by Blockchain Studio allows companies to focus on their business by simplifying how they use the blockchain. It allows them to create smart contracts without having to code. A smart contract is a layer above the protocol that matches the contract that will govern how the blockchain will be used.

Thierry Mathieu: The promise of the blockchain is that every piece of data will be certified, traceable, and irrevocable. But if you enter a false data point, it will be false for eternity. The blockchain doesn’t have the capacity to ensure that the data written into it is relevant or true. As the English say, "garbage in, garbage out": you have to make sure you have reliable data that hasn’t been changed before going into the blockchain.

Eric Larchevèque: When we talk about decentralization we’re talking about personal sovereignty: you are your own bank (if we’re talking about crypto assets). Pragmatically-speaking, you have to secure information that’s impossible to remember and likely to be hacked if they are stored on a computer. Ledger offers a digital safe, a kind of USB key that is actually a secure computer, for individuals who have cryptocurrency and want to make it secure or for financial institutions and the world of connected objects where we have increasing information certification needs.

The blockchain already allows companies that don’t communicate (competitors, for example), to do so. This is the case of the Energy Web Foundation, a consortium of energy companies; LaBchain, launched by the Caisse des Dépôts; and R3, whose baseline is "Helping businesses transact directly, seamlessly and securely.”

Working together: the blockchain avoids unnecessary replications, re-keying, and storing the same data in multiple intermediaries. Companies will have a single database that will be used by all. Which, in turn, will generate new ways of working.

Claire Balva: While it's tempting to have "your" blockchain, it's not always the best thing to do, and blockchains must be able to talk to each other. The question of standardization and interoperability between different protocols is a key issue; there’s a race to the standard going on. Many experts rely on the fact that one of the blockchains will prevail against others.

Metaphysical Conclusion by Erik Orsenna: A Step in the Immemorial History of Trust

751 AD: The Abassid Arabs, allied with the Tibetans, defeated the Chinese near Samarkand and discovered paper. Until then they had been writing on parchment, which was easy enough to scratch on and write something else, making it easy to make fakes. It is much more difficult on paper, being so fragile, and on which one can more easily draw illuminations. They very quickly began using the paper to write the Koran, and in response, the Catholic Church excommunicated all those who used paper! The West took forever to catch up and adopt paper. It is only around 1250 that the first paper mill was created in Italy.

In the fifteenth century, in Portugal, Henry the Navigator embarked on an exploration of the world. In each boat a notary traveled with them trip after trip, recording the knowledge acquired, the lands discovered and the latest data representing knowledge of the world on the "general map". Using this map they made "real" maps for the Portuguese and fake maps for competitors.

In the middle of the XV century, reform can be compared to a protest among a trusted third party –the church – as the printing press appeared. Blind recourse to the Pope and priests was suppressed, and direct interpretations of the Bible were shared directly from community to community. For its part, the church used the new technology (printing on paper) to make indulgences- a kind of token.

Do we earn more trust when we get closer to being human, or when we stay away from it? Some people think that robots are better than surgeons, and software better than airplane pilots. The relationship between humanity and trust is central. We increase trust by eliminating the human, but the trusted third party is still essential. This morning – the digital wakeup – led us to question how the blockchain cuts across the most fundamental questions. The key one involves our pact of trust with knowledge. If this pact is broken it leads both to extreme barbarism on the one hand and extreme suspicion on the other.