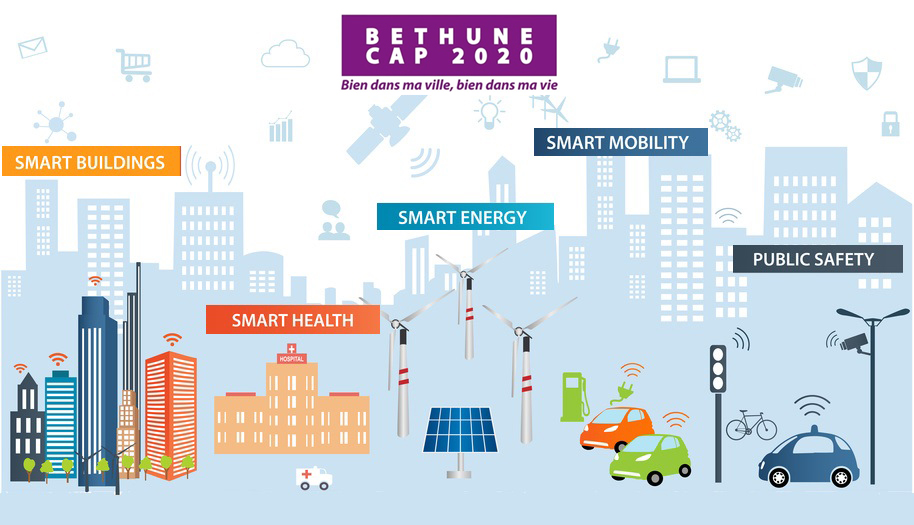 Call for Innovative Solutions for a Medium-Sized Smart City

Béthune wants to set up a smart city project that is adapted to its geographical, cultural and economic characteristics. In doing so, it wants to improve the quality of city services and to put citizens squarely at the center of its development plans by better coordinating its initiatives with its good intentions. With this broad goal in mind, ENGIE – as a partner of the city of Béthune in its plans for people-centric digitization – is launching a call for projects to develop innovative solutions based on new technologies that are aligned with the city’s Smart City masterplan

The call for Smart City projects that ENGIE is launching is meant to discover new solutions for making Béthune a collaborative, sustainable and innovative city, while also accounting for its specificities as medium-sized municipality.


Proposals could be structured around the seven pillars defined in the city’s Smart City Master Plan, namely:

Rewards and benefits for selected projects


The selected projects will get:

The selection committee reserves the right to change this financial breakdown based on the responses received (special prize, increase in the number of subjects, etc.)

The "Béthune CAP2020: feeling good in the city and in life!" was launched at the beginning of 2015. Olivier Gacquerre, Mayor of Béthune, has several specific important goals including making Béthune an attractive, smart and connected city.

Today, the municipality is taking the next step and wants to set up a smart city project crafted to fit its geographical, cultural and economic specificities in a way that optimizes the quality of the services it offers. Béthune wants a project that builds on the foundations laid by the pioneers of the smart city, but which takes the advantages and constraints of a medium-sized city into consideration, as well as how it is connected with the surrounding area.

The city of Béthune is aware that major societal changes will take place through a new ecosystem based (in summary) on:

The city is taking this opportunity to reorient its model for development, and more specifically the "Béthune Cap 2020: feeling good in the city and in life!" plan, to meet these new citizen-centric expectations

The digitization of society has shifted the rules for how we live: our economic models, our lifestyles and our habits. We urgently need to conceive of new ways of living together that avoid individualism or withdrawal into oneself.

The city is above all a place to be lived, where paths cross and where new perspectives are opened. This reality concerns a wide range of fields: harmonizing and sharing ways of using property, transportation, energy and citizen participation to local democracy. Such changes to our model of society are marked on the one hand by the development of digital technologies in many areas, which is forcing consumers/users to adapt to make the best of new tools; and, on the other hand, the rise of the collaborative economy, which is changing how consumers relate to suppliers. Individuals are themselves becoming the providers of new services, which are constantly shifting to accommodate their needs. We are witnessing the end of the "all-market" model. Such changes, along with significant urbanization and the need to enter a post-carbon era, are leading cities to rethink the city of tomorrow. They are using data to build public policies that meet the realistic needs of their citizens the best way possible.
In Béthune, the challenges of this revolution have been identified using technical innovations, but not only. So, like the Confraternity of Charities – which has been carrying the flame of the Béthune humanist tradition for more than 800 years – “the ingenious city” wants to put people at the heart of how it thinks about new urban policies, by making citizens empowered stakeholders in the city and improving their living conditions. To do so, we need to leave ultra-consumerism behind and prefer a collective, holistic approach that responds to new economic opportunities. We must stop focusing on cost cutting as a “way of adapting” to successive crises of finance, economics and confidence. It’s also important to ensure that the energy transition becomes a reality by shifting to an era of shared renewable energy use.

Applications will be evaluated on several criteria, to be confirmed by the Selection Committee. Responses may be related to one or more specific topics referred to in the description. ENGIE and its partners have the right to nominate several winners.

Projects will be chosen in 2 phases:

Winning projects will be selected by a committee composed of representatives of the City, the urban area, ENGIE and its subsidiaries, and local and national economic stakeholders.